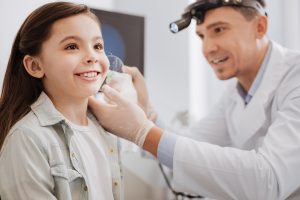 Hear, Hear: Three Things to Do When Your Child Has Ear Infection

Every parent knows the tough struggle of spotting an ear infection among kids. While a six-year-old can tell that they have an ouchie on their ear, younger kids simply can’t. They’re just often restless, clingy, and moody. As such, a lot of parents tend to be in panic mode, having no clue why their kids are behaving that way. But here’s what you shouldn’t do: start panicking. Instead, take these action steps to help your child:

1. Watch out for the symptoms

Although it’s difficult to recognize ear infection among younger kids because they can’t verbalize their pain, there are physical symptoms that will tell you of their condition. Fevers are one. While typical fevers happen in the first two days after a cold, fevers that last more than 48 hours may be due to an ear infection. Waking up a lot from naps and having trouble sleeping are also symptoms.

As fluid collects in the middle ear region and becomes infected with bacteria, swelling occurs and pushes on to the eardrum, increasing your child’s discomfort and causing sleep troubles. In some instances, the fluid will come out of the ears. If you notice that your kid has been tugging their ears frequently, that could also signal the problem.

Take note of your child’s symptoms so you can bring this to a discussion later on with their pediatrician. Salem-based practitioners recommend keeping a health diary to avoid missing important health information.

Until you’re able to see a doctor, try to reduce your child’s discomfort with home remedies. A warm compress can help. Put a moist washcloth over their ear for 10 to 15 minutes. The temperature can help in easing the pain. You may also use warm oils, like olive or sesame oil, but only when you don’t see any liquid coming out of the ear and when you’re sure that there’s no ruptured eardrum.

Hydration also helps in relieving pain. Encourage your child to drink more water. Swallowing causes the eustachian tube to open, helping to drain out the fluids that collect in the middle ear. For the fever symptoms, you can let your kids take over-the-counter medications, like acetaminophen or ibuprofen. Avoid giving aspirin. For nasal congestion symptoms, use nose drops and turn on your dehumidifier.

Ear infections are one of the notorious recurring illnesses among children, but you can take measures to avoid another episode in your child. One thing you can do is to keep your child away from things that trigger their allergies. When the mucus from allergies obstructs the eustachian tube, the risk for ear infection increases. Of course, you would want to prevent allergic reactions as much as possible.

Another way you can avoid ear infections is to steer clear of people who smoke. Exposure to secondhand smoke also puts your child vulnerable to infection. Of course, it’s also important to take note of the recommended immunizations. Vaccines can lower the chances of your child getting sick from ear infections.

It’s a real cause of concern when your child experiences discomfort, especially when you don’t know what exactly is causing the problem. Consult your kid’s doctor to stave off those anxieties.